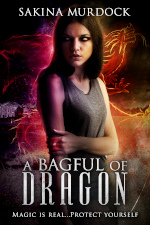 A Bagful of Dragon Trailer

Pressure. Weight. Crushing me into the mattress. A dark, airless burden across my body, heavy like a man lying on top of me. I open my mouth, to breathe, to scream. No oxygen, no air at all. Cloying darkness fingers its way into my throat.

"My name's Molly Blue and yours is something pretty unusual, isn't it? That man you were seeing, he's not very nice, is he?" She conveyed a message of knowing more than what the words had exchanged. "He isn't going to let it lie, you know."

My shock reflex yanked the key back out of the lock and I dropped the bunch on the floor. I turned slowly towards the familiar voice.

David grabbed me hard around the waist and threw his weight into me. I landed heavily on my hands and knees.

"Caleb, what are you doing here?"

He twisted his face up in a miserable expression. "She's left me, hasn't she? Why did she leave me? She took my ring."

He had betrayed me when I loved him and now I was over him, was apparently squirming back into my life. However innocuous it seemed, it was outside of normal, a Trojan horse to my well being.

"You're a good witch, Indus girl. Just get it for me, Inayat. Pretty please." His blue eyes glinted through his exaggerated squint.

Caleb swaggered in with a bulging Morrison's bag-for-life, carrying it straight into the living room to dump on the kitchen counter. It tipped over, pouring out silk fabric pouches that rattled as they landed. Stones and jewellery and something large, solid and very hard snuggled right at the bottom. As I pulled it out, the pit of my stomach jerked. The fist-sized amethyst geode glittered with energy.

I was such a fool.

Molly's grin was wicked. "Ordinary people in all walks of life use magic. They get it off the internet. You've got to keep a lookout."

Indira's eyes were so huge they made the rest of her look tiny. "They can't do the scary stuff if you don't believe it, right?"

To my surprise, I realised she did believe it and anyway, yes they could.

"Just a minute, Miss Tate." Sergeant O'Brien stepped through into the space. "You go out with someone and you don't like them, it's simple. Don't see them again. You don't have to see them again and you don't need to pay someone in sex for a date. This isn't the Stone Age. He doesn't get to club you over the head and drag you back to his cave."

"Can I try a couple of pieces on?" Indira's enthusiasm couldn't be squashed even by dodgy provenance. The garnet ring appeared in her fingers and she held it up to the light.

"Nice colour and no flaw in it. Is it a garnet?" She wriggled her finger into the shank and slipped the ring over the main joint. "Ooh, weird." She frowned as she fiddled with the ring. "It's like it tightened."

The creature laughed maniacally and pushed off from me.

"Why don't you just fly away?" I yelled, waving my arms high.

It flashed into nothing but reformed immediately and alighted on the sofa armrest, massive claws gripping the leather tightly.

I lay back and viewed it through half-closed eyes, a long, sleek head that tapered to a horned nose, ten feet above the sofa. Its great wings grazed the ceiling. They fluttered lightly to keep its balance and the breeze stroked my cheek. Calm descended upon the room.

The men simultaneously leaned in and got hold of her shoulders. Indira's left arm swung upwards as though it had a life of its own and a red beam of light exploded in her palm.

I stepped into the room, pushing the door wider. The handle felt warm to my touch as though someone had been holding it for a while. The white thing took shape. An animal skull with dark horns that I hadn't been able to see from the doorway. Maybe a goat or a sheep. It seemed too large to be either. The horns curled downwards and the eye sockets–they had a presence, as though they were watching me.

I looked down. Daubed on the boards, a complicated pentacle with unfamiliar characters. I had placed my feet perfectly in the centre.

I twitched the velvet curtain and the full horror hit me, a solid line of demonic militia, armoured monsters looming out of the darkness. They stamped, shook their weapons and fists, pushed and shoved each other.

As I opened the flat door Caleb staggered through the gap, his hands writhing around his head, grabbing his hair, his ears, his face.

"Worms," he uttered. His mouth twisted into an agonising grimace and he dropped to his knees. A blood-curdling squeal ripped through the very fabric of the building.

Through the swirling, angry fog was a monstrous shadow with horns, two tree-like arms. The sound of steel drawn from a scabbard rang out in a minor key and a distant furnace roared.

Caleb took hold of a small shard of mirror in his cheek and plucked it out. A rivulet of blood ran down his face, but he pulled another and another from his neck, his ear, his jaw, flicking the pieces of glass towards us as he went. They clinked as they hit the floor at my feet and I jumped backwards.

The demon's hands came around the back of the dragon to grasp its spine, but blue and red blood splattered across the floor and my bed and the monster faltered. Alon seemed to expand, no space left for air. His wings double wrapped the gigantic fiend before it could let go, even as the fire in its eyes overflowed and ran across the pair of them, lava in place of tears.

"All women love rape, Inayat. That's why they drive us to it." He pulled something long and dark out of his messenger bag. A Maglite torch, heavy and over a foot long.

I heard screams of rage and fear, caught glimpses of terrible, beautiful faces, distorted by terrors that could never end for them. The wretched spirits of his previous conquests pressed in around me, as though they held me up, pushed me to perform what needed to be done.

I directed the energy through my body, shooting mercurial light from my outstretched arm, through my forefinger. As I opened my palm upwards and raised it towards the ceiling, a pool of shining reflective matter rose up spinning, a whirling tower, a curtain of energy around him. I turned the vortex inside out, bright energy on the inside, transparent on its outer limits, giving a clear sight of the captive within.

Molly smiled serenely. "You'd be surprised what the spirits say about you, dear."

Magic is real, protect yourself.