A must read 90s cyberpunk classic.

High above the dangerous streets of post-quake San Francisco Island, mechanically modified professionals link minds in a cybernetic telespace to push through big deals and decisions at lightning speed. But unexplained telelink blackouts and bizarre hallucinations have marred mediator Carly Quester's debut appearance before a computer-generated Venue–forcing her to consider delicate psychic surgery at the hands of a robot therapist, Prober Spinner.

Suddenly the ambitious young mediator is at risk in a deadly Artificial Intelligence scheme to steal human souls–because the ghosts of Carly's unconscious may be a prize well worth killing for.

Lisa Mason has provided extras that give an insight into the genesis of Arachne.

Arachne is an unique entry in the cyberpunk genre. It steps between the dystopia of William Gibson and the otherworldliness of Phillip K. Dick.

Full of 'almost' body-horror, corporations so mega that they transact court cases in nanoseconds, and AI characters with more spiritualism in their circuits than the humans that inhabit this post Big-One San Francisco.

A must-read for cyberpunk fans!

Cybernetics, robotics, the aftermath of San Francisco's Big Quake II, urban tribalism - Lisa Mason combines them all with such deftness and grace, they form a living world. Mason spins an entertaining tale... She allows Carly's robotic allies a measure of personality and sophistication beyond the stock role of a chirping R2D2 or a blandly sinister Hal... Her characters and their world will stay with you long after you've finished this fine book.

Lisa Mason stakes out, within the cyberpunk sub-genre, a territory all her own.

Mason's endearing characters and their absorbing adventures will hook even the most jaded SF fan.

Arachne is an impressive debut by a writer gifted with inventiveness, wit, and insight. The characters face choices well worth reading about. This is cyberpunk with a heart.

There is a refreshing amount of energy associated with Lisa Mason's writing. The good old values are there: fun, excitement, drama - but served up with new and original twists. Lisa Mason is definitely a writer to watch - and to read.

Lisa Mason must be counted among science fiction's most distinctive voices as we rush toward the new millennium.

Get more with this cyberpunk classic

You get exciting new extras when you buy the cyberpunk classic, Arachne by Lisa Mason. Download yours today!

The original story that appeared in OMNI Magazine in 1987, and became the Arachne novel in 1990.

A post by the author on how to turn a shorter work into a longer one.

Add a widget for Arachne to your website or blog by copying & pasting the following HTML snippet into your page. 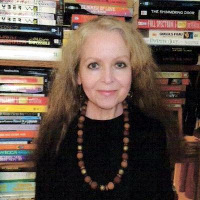 Her most recent speculative novel is CHROME.

Lisa Mason lives in the San Francisco Bay area with her husband, the renowned artist and jeweller Tom Robinson.

The Witches of Greasy Creek

In an attempt to start her life over, Kate Lawson stumbles into a world of ghosts, a missing girl, and an unsolved murder.