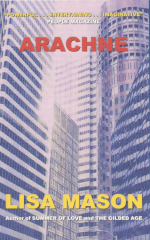 The chair waits for her in the ruby-lit room. Carly Quester steps inside, slams the door. The chair sits in silence. Carly stalks around it, kicks its ugly feet, glares at it.

The chair is primitive, plain-legged, straight-backed. It is rude and mean, as impersonal as the gridlock. Black plastic wires loop and trail all around it. A red switch juts up from one arm. Platinum beams angle into a frame that will pitilessly grip her when the power switches on and her body jolts.

Carly Quester is a slim-limbed genny with customized morphing. Strands of copper and gold thread her hair, which falls to her shoulders in style de nuevo. Ebony lash implants line her eyes, a romantic gift from her father in the sixteenth year after the lab decanted her. Wide feathered brows and curved cheekbones hint at the Sino-Slavic bioworks her pragmatic mother had chosen. She slicks her lips plum-red.

Seated in other chairs, in other rooms, she will cross a silk-stockinged ankle over the other knee, and she thinks nothing of striding up the quake-cracked hills of the City in her gray-snake, four-inch heels.

She's just turned the age when you start to do things in the world.

She sits down, knees side by side.

Straps of black plastic, filmy with dried sweat, lie limp on the chair's arms and legs. She snaps the straps over her own arms, her own legs. A mocking slap of cruelty, that she should have to strap herself into the chair.

She breathes deeply—one, two, three—preparing for the moment when the power switches on and the neckjack descends.

But how can anyone ever really prepare?

It's fine to speculate, to envision bravery. You strap in. You sneer at the ruby-lit walls. You jeer at the wires. You welcome the bite of the neckjack, welcome the pain.

She kicks at the wires with a high heel. With her forefinger curving over the arm's edge, she yanks the red switch herself just to do it, cool tool.

With a shudder, she leans back. Her spine presses the master control. The control signals the headpiece to descend with a rasping whine. Wireworks yawn open, clamp down around her skull.

In front of her, the comm flickers on, flooding her eyes with jade luminescence. A hum commences, rising up in an awful crescendo. The neckjack darts out on a robotic cable, its tiny platinum beak biting deep into the linkslit installed at the back of Carly's neck.

The red switch clicks, and the power slams on.

Carly's consciousness departs from her body, instantly sucked out, twisting up wraithlike from the twitching flesh-and-blood left behind.

A roar explodes all around her. Pain thrusts through her. Pressure squeezes her like a huge fist. Then pain and pressure vanish. She finds herself in darkness like light turned inside out, what telelinkers call the Zero.

She zooms through the Zero, giddy and wild. The Zero releases her bodily pain, neural fireworks shooting off streamers of bliss.

In all its manifestations the tunnel, Carly knows, is a mental construct. Same as the illusion of speed and her journey. Images conjured by her consciousness for the phenomenon of importing her telelink into telespace.

In the distance shines a clear, white light—the vast sector of public telespace.

According to instructions, she aims for the light.

Angry clouds roil before her, obscuring her destination. A bright blue bolt zigzags across the left perimeter of her telelink. An immense sheet of black glass whirls across her right perimeter, then shatters into glinting shards.

Systemic static, that's all. Persistent spatial logic feeding back through her telelink and reemerging as flak. Not fatally harmful. But the unruly illusions could divert her from the subtler signs of a jacking going wrong.

She's not pleased. Not pleased at all.

Here, in telespace, Carly Quester has a presence. The neural program of her telelink takes the shape of a cube imbedded on all sides with her face. Her intelligence gives the cube perfect geometric dimensions. Her training tightens it, creating crisp, clean edges. Her ideals make the cube gleam like mother-of-pearl. Her pride boosts the energy propelling her.

Aim for the light! She shoots through the angry clouds, dodges the blue bolt, ducks as the shards of black glass spin away.

She speeds on, accelerating faster, faster, pushing to the limit. She can't afford to be late!

Suddenly a clear, white light shines all around her, immersing her in radiance. Her telelink vibrates with the ambient power of public telespace.

She's arrived. But she's not done. Not yet.

Next she must merge the idiosyncratic pattern of her consciousness, of her telelink, with the standardized algorithms of public telespace.

She dives into the light, spinning the radiance all around her, speeds out and through the other side.

The clear, white light is the referent for public telespace: luminous, vast, and orderly. Consensus made manifest. Public telespace is the aggregated correlation of five billion telelinks worldwide. The best minds, the most prominent, the most popular, the most acceptable according to Data Control. All merged and standardized into the largest computer-generated, four-dimensional virtual reality ever known: Telespace.

Hot damn, tool, it's mega to merge! Jacking in, importation, the merge—these are Carly's own small triumphs. So much could have gone wrong. Misjackings, when the platinum beak misconnects with your hardware. Detours, when Data Control is working on a path and you have to reroute. Crashes during importation, the awful white buzz when the power abandons the chair.

Always risks for a professional telelinker.

Carly Quester knows the risks. Most of them, anyway. She's a newly certified mediator. All in a day's work.

She allows herself a sigh of relief. This is as close to a bad jacking as she's ever had. Jacking ought to be like working the gears on a ten-speed bicycle—instant, smooth, and mechanical.

Her telelink joggles with annoyance. She's squandered two seconds foolishly recoiling from the chair. Squandered two more seconds dodging the systemic static, and another half-second fuming about it.

Now she is four-and-a-half seconds late.

Tweak it up, tool. Accelerate the jacking. Edit the importation code. Narrow the perimeters. Something! More than one telespace trainer has told her she possesses hyperactive imaging. This is not necessarily a good thing.

And she's a student no longer. She's completed telespace training with a mediator's degree. She's passed Data Control's certification test on the first try when three-quarters of applicants fail. She's a professional telelinker, newly hired by the prestigious megafirm of Ava & Rice.

Every aspect of society depends on telespace, every aspect of business and finance, of politics and power, of daily commerce, of personal communication, of education and propaganda. Every aspect of reality, really, except maybe death and Data Control is working on that.

Every pro linker who expects to succeed in this blazing new world must navigate telespace. Negotiations, mediations, dispute resolution, compliance, administration. Anyone doing anything worth doing must deal with telespace.

She intends to master it.

Because she believes this is the true aim of mediation—to become an architect of a just society, a facilitator of good will, an arranger of resolutions.

A golden castle wall towers before her. Precious gemstones sparkle here and there—rubies, sapphires, emeralds, amethysts. Every merlon at the wall's crown holds a huge diamond and in each diamond shines a wide eye of glittering white light.

Carly speeds up to a gate in the wall.

Before the gate whirls a column made of silver sparks. The column twirls to and fro, the stamp of authority from Data Control emblazoned on its faceplace in red and blue alphanumerics.

The column is merely a mac, a monitor of access codes. Looking closer, Carly can see the unsightly pock near its crown, gaping at her like a misshapened mouth.

Yet this pocked-marked little mac patrols the golden gateway into the Prime Time.

Carly permits herself an exasperated sigh.

Macs implement security in restricted telespace like the Prime Time but they're merely code processing programs comming with powerful Data Control sengines. Very simple and simple-minded artificial intelligence but crucially important in the peculiar pecking order of telespace. Thanks to macs, the cowboys, pirate viruses, and spybytes have a tough time breaking into restricted telespace and corrupting everyone's telelink.

AI enforce the checks and balances Data Control deems necessary and carry out monotonous and repetitive tasks. Yet AI are given an extraordinary degree of control and responsibility without the capacity for judgment. AI gums up the works everywhere.

The mac twirls aimlessly to and fro. The gape at its crown widens into a leer.

Before this morning, she'd been a mere bit in a huge mediator program, a cog in a massive linked wheel, the new tool safely tucked into place. Before, she'd effortlessly entered the Prime Time along with the megafirm's team, partners hovering over her, associates linked next to her.

Come on, Carly Quester, master of telespace. Do something.

She inflates her cube to double its size, a simple trick she pulls out of her graphics utilities but effective to a tick-tock mac.

The mac reels back, uttering inarticulate curses. It extrudes a little silvery tube from its midsection and whistles, "Nuke you."

Sluggishly the mac processes her ID, streaming the sequence down the path. In a twentieth second, the Data Control sengine confirms her access. The formidable golden gate dissolves into amber mist.

Another two precious seconds have fled irretrievably into the past.

Her telelink zooms to the specialized sector called the Hall of Justice.

The bronze badges of peace officers mill about, the copper squares of corporate managers. The pink bulbs are recreational telelinks who've seized upon some reason to be here, spectators or witnesses waiting to be called to a Venue.

The slick geometric telelinks, now those are pro linkers—mediators like Carly. Blue accordion folders—the links of clerks—scurry by like centipedes. Torches illuminate doorways to the Venues.

Here the fate of millions is decided. Here the structure of society is negotiated, bartered, bought and sold, and sometimes shot to death.

A thrill runs through Carly. Then anxiety. Anticipation and fear ping-pong in her heart.

Today is different. Today she is no mere bit in a huge mediation program from Ava & Rice. No tiny cog in a massive linked wheel. No new tool safely tucked into place.

Today she must make an appearance in a Venue by herself. Today she must present a counterclaim for the defense in the matter of Martino versus Quik Slip Microchip, Inc.

No partner hovers over her, no associate links next to her. This is her first mediation, solo.

Today Carly Quester is on her own.