Only seventeen years old, Hettie Alabama leads her crew of underdogs with her father’s cursed revolver, magicked to take a year off her life each time she fires it. It’s no way for a ranch girl to grow up, but grow up she must. Her scars and determination to rescue her vulnerable younger sister deepen with every year of life she loses.

The Devil’s Revolver opens with a shooting competition and takes off across the landscape after a brutal double murder and kidnapping — to which revenge is the only answer.

Why you'll love The Devil's Revolver

This carefully constructed alternative Western story is populated with interesting, but not always likeable, characters. The magic is strange and unpredictable, and is very much part of the world, not added on top.

While a YA fantasy, the book never shies away from addressing the very real violence and horror of genocide and colonisation.

The Devil's Revolver is a riveting ride that mixes the grit of Westerns with the world of magic. McGrath loads this fantastic story with action, suspense, adventure and unforgettable characters. You'll definitely want to pull the trigger.

Immensely readable, gritty, and sharp as a spur rowel, The Devil's Revolver is a western with a twist.

Features vivacious heroes with tricks up their sleeves.

There's death and dying and secret operatives and speculators and dirty Pinkerton agents, a cowboy gang, werewolves, vampires and more in this story. Trust me, you won't be bored.

This is such a great book. The writing is excellent, the plot is packed with action, intrigue, and twists, and the world is fascinating.

A Magical World of Words

The feminist western you’ve been waiting for: The Devil’s Revolver has heart and grit. A terrific genre-crossing tale with a deft touch of the macabre.

Donna Thorland, writer on the Netflix series The Chilling Adventures of Sabrina

As for the plot and pacing, both were well-done with enough action and stakes to keep me reading, but not so much that it was exhausting. And while there were some violent, grim scenes and moments, I still found the book to be pretty fun overall in that action-packed, guns-and-magic-ablazin’ sort of way.

It's a fantastically readable female focused story, as Hettie (not pretty! not looking for a man!) sets out to save her abducted sister with the aid of a demonically powered gun that ages her a year every time it kills for her.

News about The Devil's Revolver

Ride into the Weird West with a cursed gun!

Scarlet Ferret is honoured to present our latest addition. Saddle up for the exciting Weird West action-adventure young adult novel, The Devil’s Revolver by V.S. McGrath.

An essay on the author's journey to decolonize their thinking and writing.

Add a widget for The Devil's Revolver to your website or blog by copying & pasting the following HTML snippet into your page. 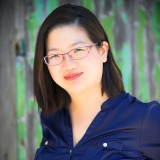 V. S. McGrath is a published romance author (as Vicki Essex) and has six books with Harlequin Superromance: Her Son’s Hero (July 2011); Back to the Good Fortune Diner (January 2013), which was picked for the Smart Bitches Trashy Books Sizzling Book Club; In Her Corner (March 2014); A Recipe for Reunion (March 2015); Red Carpet Arrangement (January 2016); and Matinees with Miriam (November 2016). She has been featured in the Globe and Mail, Metro Toronto, Torontoist, Inside Toronto, and Canada.com. The Devil’s Revolver is her debut young adult fantasy.

She lives in Toronto, Canada.