The exciting sequel to the near-future US epic R/evolution.

Corporations, in the hunt for his elusive genes, have ripped apart communities and twisted laws to try to cash in on his slow ageing, and its promise for immortality. Their minions in the government have erased the past to control the future.

To preserve his anonymity and, with it, a chance at equality for millions, he's witnessed the deterioration of personal freedoms, ethical boundaries and basic infrastructure. But some acts he can't just sit by and watch.

In his quest to save people from being hunted down, William happens upon the survivors who will shape his destiny and the world's fate.

Now that those in power have sidelined all progress they can't profit from, it's up to William, Lillian, a girl born in a marine salvage yard and destined for more than the depths, and us others to wrestle back evolution, lest it become one more product to manufacture cheaply, poorly and for one faction's gain.

This is a book that speaks of all the possible outcomes of the long-term fight between the haves and have-nots. In a world of undeniable climate disaster, unspeakable politics and disaster capitalism, where money and wealth and the occasional remarkable person are all that make things happen on a significant scale, Evolution is a book that cries out to be read. Despite the aforementioned hope, Johnson pulls no punches and provides no fluff. She's all about adaptation and a preparedness to see things through to the bitter result of all that has gone before.

If you've got an interest in the human condition, an anarchist's desire to change the system, or if you just want to read a story that takes society's current nightmares and places them forefront in the imagination, this one's for you. 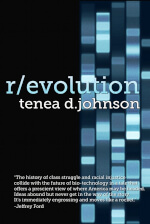 Both books in the Revolution series

Evolution by Tenea D. Johnson provides dull pain as humans destroy themselves over and over, the same modern pressures we already know, ramped up to the extreme.

Buy the Revolution Bundle and save!

Evolution, the exciting sequel to R/evolution, by Tenea D. Johnson, is available to buy now from Scarlet Ferret - along with a special offer.

The Ballad of Big and Lill

The author's recital of the ballad sung about the protagonists in Evolution.

Add a widget for Evolution to your website or blog by copying & pasting the following HTML snippet into your page.

Can a musician heal, when a physician cannot? Can Sorley's music convince the gods to spare a life – and if so, at what cost?

In December of the year 1377, five children were burned to death in a suspicious fire. A small band of villagers travelled 200 miles in midwinter to demand justice for their deaths.