Author Receives £7.19Fair means fairSensible prices and good rates for authors.
Authors get 80% of the listed price, and our prices will always be reasonable. No unsustainable discounts, or ebooks that cost the same as a print book.

The Season Pass gives you all four books as they're released, for the price of three.

Queen is a gas giant, where space-suited beekeepers tend enormous floating hives to extract the precious rocket fuel the giant bees manufacture within. The Fermi desperately needs that fuel if its crew don't want to starve to death stuck on their ship, so they strike a deal. The Fermi will rescue some stranded beekeepers in exchange for a tank of fuel.

But things take no time to go wrong, and soon two of the crew are marooned in an increasingly hostile alien hive, while something has made it back to the Fermi...

More about Planet of the Apiaries 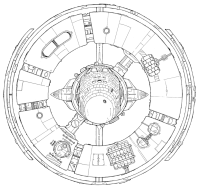 A Brief Guide to the Civilisations of the World

These notes were given to initiates of the fleet's hospitality corps, those tasked with meeting and establishing relations with new cultures as the fleet sailed within reach of them.

Preliminary sketches of the Fermi

Initial sketches the cover artist created of the Fermi, including the so-far only side-on look at the ship.

The Further Adventures of Samson 39

Before he was in Fermi’s Progress, Samson 39 was the star of his own series of thrilling adventure novels. Read their blurbs and extracts.

And all extras from each book's release.

Add a widget for Fermi's Progress to your website or blog by copying & pasting the following HTML snippet into your page.

£2.99 Book 1 of 4 in the Fermi's Progress series Fresh, fun SF with a dark conceit. The Fermi is Earth’s first faster-than-light capable spaceship. It’s also its last. The moment the Fermi's engines engage, it unleashes a shockwave that vaporises entire planets, entire solar systems.

£2.99 Book 2 of 4 in the Fermi's Progress series The Fermi continues its voyage of disc... destruction! The Fermi is the Earth's first and last faster-than-light spaceship. The last, because it turns out its engine vaporises entire star systems in its wake. And nobody knows how to turn it off.

Pre-Order £2.99 Book 3 of 4 in the Fermi's Progress series How bad can it bee... The Fermi is the Earth's first and last faster-than-light spaceship. The last, because it turns out its engine vaporises entire star systems in its wake. And nobody knows how to turn it off.

£2.99 Book 2 of 4 in the Fermi's Progress series The Fermi continues its voyage of disc... destruction! The Fermi is the Earth's first and last faster-than-light spaceship. The last, because it turns out its engine vaporises entire star systems in its wake. And nobody knows how to turn it off.

£4.99 Fear the outside! An oppressed world locked inside a shell, without a single star to wish on. Now the void beyond has spat back Michael Formir, splintered in mind and body. And he may have brought something terrible with him.