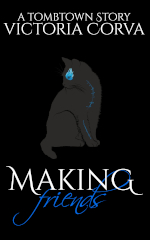 Everyone wanted Gretel to make friends, but she was running out of materials. She watched her parents argue about it, voices low, their faces half-lit by the dying ember-fire.

'People are beginning to talk.' Pa rubbed his face tiredly and took a sip from his tankard of dusty ale. Shadows deepened the worry-lines on his face, making him look a part of the gnarled wood walls behind him. 'I heard Sif and Mara talking about it today while scribing that new holy text. Saying it's not right, how she never plays with the other children, just hangs about in the graveyard talking to the headstone for your old mum.'

Gretel chewed her lip and shifted under the table where she crouched. Her cat, Brush, bumped against her knee. The carpet, pocked and threadbare, barely shushed beneath her feet.

Mama folded her arms across her belly. She had the brittle look she always got whenever Nanny was mentioned. 'She misses her. There's nothing wrong with that.'

Pa gave her a long look and said nothing. He'd said 'your mum was a witch' so many times that Gretel could hear it in the silence, but he knew better than to say it now. Mama wouldn't hear a wrong word said about Nanny, even though they'd fought daily before she'd been taken. Death sometimes brought people closer together. Gretel thought that was beautiful.

Gretel thought a lot of things about death were beautiful, but she wasn't allowed to talk about that. She was allowed to talk about food, and temple, and her unending apprenticeship at the scribehouse where Pa worked. And 'interests appropriate for a girl of ten summers' as Pa would say. Not about her cat, who stank of rot but was obedient without training. Never about Nanny.

Brush started to make a wheezing sound, drool bubbling from the corner of his lopsided mouth. Gretel shushed him, then scratched his lone, tattered ear.

Mama glanced around and Gretel held her breath, but her mother's gaze never grazed the kitchen table, nor the pair hiding in its shade. 'She'll make friends. She's special: someone is bound to see that.'

Pa smiled like his cheeks were hard to lift. 'She is special, there's no doubt there. But how long before she goes like your old mum? If she can't fit in, they'll come for her.'

'I don't think they give a damn how old she is.'

Gretel stroked Brush while her parents turned the conversation to work. Her fingers felt over the thick scar tissue where she'd stitched his eye back on, nearly straight. Brush didn't purr, or lean into the touch, but Gretel found it calming all the same.

This friend problem was worse than her parents realised, but then she'd always considered her parents endearingly stupid. They thought that if she made herself small and bland and amiable, that somehow people would overlook the red splash of birthmark on her face, or the hunch in her shoulders.

But Gretel didn't want to shrink and hide. She wanted people to see her. She wanted them to know that she was special. And as Nanny had taught her, the only way to do that was to make them.