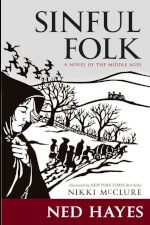 Pray for us, we sinful folk unstable....
My child is dead within these two weeks,
Soon after that, we went out of this town...
Up I rose, with many a tear trickling on my cheeks

A curious incident is brought to our attention from the year 1377. In December of that coldest year in the medieval records, the village of Duns in the northeast of England suffered a great tragedy. Five of its young boys were burned to death in a house fire near the center of the village.

As was common with many tragic events in that century, it was supposed the Jews were to blame. Yet all Jews were destroyed, forcibly converted, or expelled from England by order of the Crown, some fifty years earlier, in 1325.

Although most English peasants at that time had never traveled during the course of their lives more than twenty miles from the place of their birth, five men from the village of Duns loaded the charred bodies of their children on a farm cart and journeyed over two hundred miles to London. The Court record states that the villagers went to present the bodies to the King, and to demand justice against the Jews.

The historical record is clear on these few facts. History does not record any further details about the incident - neither the motivations, intentions, nor experiences of those who undertook this arduous journey are noted. Not a single person from the village is identified, not even the guilty party.

Liturgy of the Hours

IN THE END, I listen to my fear. It keeps me awake, resounding through the frantic beating in my breast. It is there in the dry terror in my throat, in the pricking of the rats' nervous feet in the darkness.

Christian has not come home all the night long.

I know, for I have lain in this darkness for hours now with my eyes stretched wide, yearning for my son's return.

Each night that he works late, I cannot sleep. I am tormented when he is not here-I fear that he will never return. I lie awake, plagued by my own fears of loss and loneliness.

But my fears have never come to pass.

So on this night, I tell myself that the sound I hear is frost cracking, river ice breaking. I lie to my own heart, as one lies to a frightened child, one who cannot be saved.

All the while, I know it is a fire. And I know how near it is.

First, I could hear shouts and cries. Then there was the sound of rapid running, of men hauling buckets of water and ordering children to help. A house burns.

Yet always I fear to venture forth, for my fright has grown into a panic that gibbers in the dark. What if someone started this fire to burn me out?

What sport would they have, watching a mute moan as she turns on the spit?

A crackle and hiss in the distance. A heavy thud, and then the roar of an inferno. Where is Christian? I must go, I-

Scrambling out of the straw, I rush to the door in my nightclothes. Then I remember poor Nell, who died last spring.

I do not forget her agony.

I blunder in the darkness, fumbling for the fireplace soot. I smear the smooth edge of my jaw, marking with trembling fingers a hint of beard on my soft upper lip and my chin.

Always, I must hide my true face.

As my fingers work, I grip hope to me, a small bird quaking in the nest of my heart. Desperately, I mumble the words of a prayer from my past.

My sooty ritual is perhaps my own strange paean to womanhood. Like Theresa of Avignon, that spoiled heiress of the French throne, who shared my vows at Canterbury, the world will see me only as I intend. It is a type of vanity: if I cannot be a woman, I will be as ugly a man as I can muster.

And in this ceremony, my dread subsides. My fingers stop trembling. I think clearly for a moment. Even now, perhaps Christian is one of those who carry buckets of water to fight the flames. Christian will be fine. He is strong, vital, alive. He is mine, and I am his.

Then there are harsh shouting voices outside, men rushing toward the burning building. "Trapped!" they shout.

Now I quake with dread, for I am not finished. I should wrap my bosom tightly, bind the feminine shape of my body into that of a eunuch. But I lunge for the door, my bosom unbound, my heart full of fear for my son, and fear for my own flesh.

Even as my heart belies me, I pray that this fire is nothing. Nothing to do with my life, my secrets.

Across the village square, the largest house-the home of Benedict, the weaver-is consumed by flame. Every piece of wood smokes and bends in the fire. The roof seems supported not by heavy timbers, but by ropy masses of blazing smoke.

It is the home where my son is an apprentice.

The smoke chokes and claws at my nostrils and my throat. The roof catches in a roar of flaming darkness. The crowd churns in turmoil, seeking to save their village, their children.

Not one of the villagers pays the slightest heed to me.

I am an old man to them, and a broken, mute one at that-wiry as a starved mule, leathery with long labor. It is rare that any in this village look beyond the wrinkles and the rat's nest of chestnut-colored hair to see my face.

Tonight, I force them to see me. I seize each of their faces with my gaunt hands, turning them, staring quickly into each pair of wild, frightened eyes. Here is that layabout Liam's frightened pale face and red beard. He looks for his son too. Across the way is a boy wrapped in a cloak and hood. My heart lifts - is it Christian?

But when I meet that boy's eyes, they are black as night. It is only Cole, the orphan. I see my friend Salvius, the blacksmith. He runs past, throwing water on the flames.

Then I see Tom, who hangs back in the crowd. I clutch at him, wanting answers, but Tom pushes me away, his wide-set, cowish face full of fear.

I turn. I pull down another man's hood, and it is bald Benedict, the weaver who owns this house. He gives me a dark glance and pulls away, to lift a bucket of water.

I grasp a short man next, small Geoff, the carpenter, with the squint. "Where's my boy?" he shouts in my face. "Where is he?"

I turn about again, I seize on every person, look into every face. I hope for only one boy, I search for his blue eyes. My son.

Is this really all the living folk we have? Frantically, I count on my fingers. All the women accounted for and most of the men.

Only a few are not here: Jack, whose foot was trampled by a cow, and Phoebe, who is about to give birth. Benedict's wife will be with her this night - Sophia is the closest we have to a midwife now, now that Nell is gone.

That accounts for three. But where are the older boys?

Desperately, I search each of these villager's faces again and again - going over old ground - until they push me away.

Men and women shout their children's names. "Breton! Matthew! Stephen! Jonathon!" The large boy who belongs to Tom. The son of the carpenter. Then the second son of the weaver. And the eldest son of Liam, the woodsman. But there is only one name that echoes in my mind, and no one shouts it aloud. My son, my only.

The house falls half apart, split wide, a timbered carcass steaming and cracking in the winter frost. Salvius is always brave: he leaps up onto the smoldering threshold and uses a beam to batter in the smoking door. Then Liam steps into the smoke, wrapping his arms in a wet cloak.

I push my way through the milling villagers to see Liam and Salvius emerge, dragging out a charred body. Then another, and another. Five, in the end - all the missing accounted for.

My tongue forms his name, but I cannot speak a word. Instead, I give a cry - that meaningless animal groan that is my only language now.

The flames rise again, the west wind gusts strong across the heath, a demon roaring as it takes the building apart. The crackle is that of hell itself. The men run frantically with buckets of water to save the neighboring crofts.

The five bodies lie on the ground, black as broken shadows. They stink now of death. Burned flesh, scorched wool. It is a nauseating stench, yet despite myself, my mouth waters at the smell of flame-roasted meat. I am always so hungry.

A bit of metal glimmers faintly below one charred head. It is a thin silver chain. Is that my chain? My boy's neck?

I am pierced to the root then, all of my veins bathed in a liquor of terror.