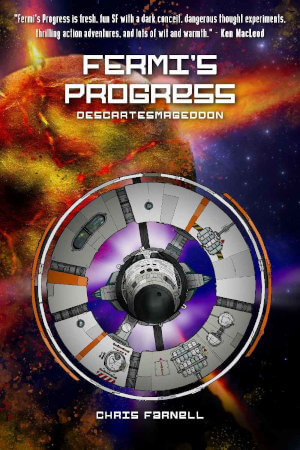 The first book in the series, Dyson's Fear, saw the crew of the Fermi test the Earth's first faster-than-light spacecraft. It was a successful test, I suppose. I mean, the engine worked... even if it did destroy the Earth and our entire solar system in the process.

The Fermi arrived at a massive alien Dyson Sphere, filled with life, civilisations, and cultures, and an extremely powerful AI. You can guess how things went!

What's worse, in Book 2: Descartesmageddon, as they reach a planet of sentient fungus, the Fermi's supplies are running low.

Fermi's Progress: Descartesmageddon arrives on the 15th of April.

£2.99 Book 1 of 4 in the Fermi's Progress series Fresh, fun SF with a dark conceit. The Fermi is Earth’s first faster-than-light capable spaceship. It’s also its last. The moment the Fermi's engines engage, it unleashes a shockwave that vaporises entire planets, entire solar systems.

Pre-Order £2.99 Book 2 of 4 in the Fermi's Progress series The Fermi continues its voyage of disc... destruction! The Fermi is the Earth's first and last faster-than-light spaceship. The last, because it turns out its engine vaporises entire star systems in its wake. And nobody knows how to turn it off.