At Scarlet Ferret, we love our genre books. Fantasy, paranormal thrillers, detective novels and sci-fi are all in our library bags. One of the reasons for our emphasis on this is the accessibility of genre. Writing that envelops us in the action has to be one of the biggest pulls – while slogging through acres of overwrought description is less than fun to us. But along came The Naseby Horses by Dominic Brownlow to show us that sometimes description is truly the meat of the novel – and sometimes the gap between genre and literary fiction can be bridged. 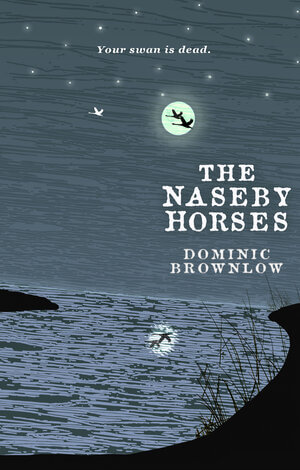 Paced gently to start with, this story builds tension from the inside. The stream of consciousness of the protagonist, a seventeen-year-old boy whose twin sister vanished on the night of his major seizure, is engrossing and steadying, as he drifts through the first day and night of her absence. The dissociation he feels is reflected in his family who do not appear to completely trust him, and the memories he describes – his photographic memory is a feature or result of his epilepsy – give the sense of a disconnect at times, between reality and truth. Together, these elements build over the next three days in the novel into a truly tense and then explosive ending, one that any genre novel could be proud of.

Your swan is dead.

Seventeen-year-old Simon’s sister Charlotte is missing. The lonely Fenland village the family recently moved to from London is odd, silent, and mysterious. Simon is epileptic and his seizures are increasing in severity, but when he is told of the local curse of the Naseby Horses, he is convinced it has something to do with Charlotte’s disappearance. Despite resistance from the villagers, the police, and his own family, Simon is determined to uncover the truth, and save his sister.

Under the oppressive Fenland skies and in the heat of a relentless June, Simon’s bond with Charlotte is fierce, all-consuming, and unbreakable; but can he find her? And does she even want to be found?

Why we stock it

We stand here, hands on hearts, to say that we read because books open up our worlds. And The Naseby Horses does exactly that. From the standpoint of a young man whose world is ever closing in on him, it gives us a certain epilepsy representation – as much as a writer who is not epileptic can do so – that helps us understand a little of what it is to be epileptic – the responsibility to self and to others; the damage it can do to the brain; the way the mind can play tricks on a person because of the changed state of the brain. The eidetic memory displayed by Simon, the protagonist, is not particularly common amongst epileptics, but it is a useful device employed with great skill in the writing. Simon’s memories are recalled to him at inconvenient and inappropriate times, where he slides into the memory as though he is watching it happen right there.

"Like splatters of blood, poppies dot-to-dot the grassy verge as I go over in my head all I can remember from that night, trying to filter old memories from those of the last few days. Somewhere in the darkness I hear the blistering crackle of rain. I go to the window nearest my bed, where the sky is bearing down like an enormous sheet of beaten metal. Lightning flickers behind it. I blink, startled, as a bee thumps softly against the windscreen, leaving the faintest smudge of grey and red on the glass.

These slides are expertly achieved, without confusion for the reader. Through these memories, we learn about him, his relationship with his sister and other characters, the background of their family’s move to the remote Fenland village of Glennfield, and hints of reasons for his family’s distrust of him.

"Sand covered almost the entire hut, making the roof appear like a ramp, which is why Charlotte had decided to leap off it, a towel draped around her neck like a cape. I think I was supposed to have followed, but I didn’t. In the instant she left the ground, the peeling apex of the hut creaking, warning her of something, I found myself on the same dunes but at another point in time. I was looking out to sea, enveloped in a fog of sulphur, an enormous black wave tumbling out of the flat horizon, heading straight towards me.

'She was always falling over,' Uncle Pete says."

We’re also witness to subtle inner breakdowns within him, such as his own take on reality, and these grow more obvious as time goes on.

"The words float about my head. Charlotte, my twin sister, the very anode of my soul, has been missing for five days now. Yet in some shadowy part of my mind, this feels even more catastrophic, as though the swan’s death is in some way more tragic than Charlotte's."

But representation alone is not a reason to stock a book. To his credit the author, Dominic Brownlow, has created a story where every word is a brushstroke, where tension is built so well that by the end your heart is in your mouth as you turn the pages. The characters are real and believable, and Simon’s fondness for some – and emotional separation from others, such as his mother – is not only readable, but felt. As a reader, you feel what he feels. This is a book that delivers an experience. It stays with you for weeks afterwards, and makes you feel things that you don’t often get with a book. We’ve all laughed and cried over books, of course, but the tension in The Naseby Horses especially towards the end tasted like the vague looming of an inevitable disaster, with panic paralysis built in.

But don’t just take our words for it:

"The Naseby Horses is an atmospheric slow-burner of a mystery within a mystery, totally at home in its superbly-evoked Fenland setting, with the author building the tension every bit as well as the convincing auras he creates. Dominic Brownlow’s book was as much a feast for the senses as a test of my nerves; he had me smelling lavender and the far less-fragrant sulphur, pausing to look with Simon at all the diverse bird life and even listening out for a spot of late-night bell-ringing. I longed for a feather talisman to wield as I read this singular story of a brother’s close bond with his sister."

"Simon shares a deep connection with his twin, one which compromises his interactions with the rest of his family and with the police who are searching for Charlotte. He’s a complex character, and Brownlow has done a marvellous job of making him more likeable and comprehensible for the reader while he remains difficult and inscrutable to the adults in the story."

If you’re looking for a book that is equal measures tense, philosophical, beautiful and enthralling, The Naseby Horses by Dominic Brownlow will thoughtfully tick all those boxes and leave you with a sulphurous taste in your mouth.

A teenager, recovering from a massive epileptic seizure, attempts to unravel the disappearance of his twin sister, while fact, legend, memory and epilepsy tamper with his reality.

More about The Naseby Horses 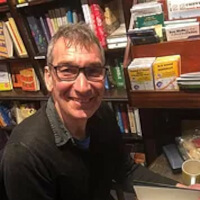 Dominic lives near Peterborough with his children. He worked in the music industry as a manager before setting up his own independent label.

A teenager, recovering from a massive epileptic seizure, attempts to unravel the disappearance of his twin sister, while fact, legend, memory and epilepsy tamper with his reality.