Gareth Jelley recently took over Interzone's editorial reins from Andy Cox, and will soon be launching issue 294 of the long-running science fiction magazine. Readers can buy physical copies and subscriptions from the usual retailers, but along with the fantastic Weightless Books, Scarlet Ferret is one of only two outlets to stock digital issues of Interzone.

Gareth has taken our DRM-free Special Edition ethos to heart, and has included some fantastic extras, including exclusive stories, early excerpts, and even FREE access to Interzone Digital's Members Area.

Interzone Digital is the online side of Interzone, and is the place to read science fiction stories, interviews, excerpts, and in the Members Area, classic Mutant Popcorn film essays by Nick Lowe. And the artwork? Wow! 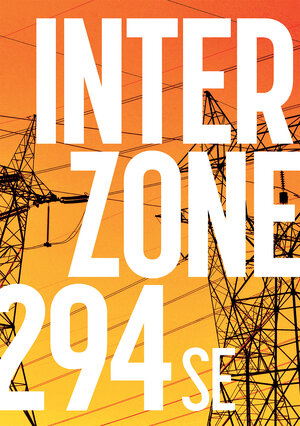 Our first Special Edition Interzone issue is the pre-order for #294. Look at that cover!

The Table of Contents is stunning. Here's what you can look forward to in Interzone 294 when it launches in January 2023!

When a refugee awakes on a beach to a personal tragedy, he soon realizes there is truth to the saying 'out of sight, out of mind'.

A wise-cracking detective with a deep-rooted fear of ventriloquist dummies tries to solve a locked-room mystery where the victims are being murdered in an impossibly brutal fashion.

In a world where criminals are redacted, ████ from the Bureau of Redaction must track down a serial killer before █ strikes again.

The Coming of the Extroverts

Aliens invade under the guise of East City's newest band, The Extroverts. Only one person can stop them: Moog, part time holo-synth player, who is looking to replace them on the bill…

Seven Shots at the Ultimate High

The club's called EVOLUTION. You know the price, and what you get: 25 minutes of bliss, your mind opened to the stars. Isn't it worth it, to feel like that? Isn't it worth everything for a chance to fly?

The Building across the Street

To avoid getting chipped and interred at a facility for the unhoused, Leland agrees to help intercept alien dispatches originating light years from Earth.

Last Act of the Revolution

Esther was a woman who lived the revolution, fighting with every breath she had to free a world from its corporate overlords. Trouble is, the revolution won.

An Interview with Christopher Priest by Paul Kincaid

Nothing But Beautiful Stories

An Interview with Cassandra Khaw by Laura Mauro

First in a new series of essays by Val Nolan

Zelazny, from A to Z

First in a series of 26 essays by Alexander Glass

We always include Extras, right? Well, our magazines are no exception!

Included with this Special Edition issue are:

As well as the magazine issue and bonus short story, Special Edition readers also get FREE access to the Interzone Digital Member Area, for exclusive stories and essays.

Interzone is Scarlet Ferret's first foray into magazines, and we're expanding our services to ensure readers get the very best buying and reading experience.

We're starting with single-issue pre-orders and sales, but will soon launch subscriptions, so you can buy once and receive digital magazines direct to your inbox.

In the meantime, pre-order Interzone 294 and get ready for your Special Edition in January 2023!