The concluding part (?) of Chris Farnell's epic science fiction series, The Phone Job, is available to pre-order today. The grand finale in Chris' space opera, 'planet of the week' homage - it's longer, action-packed, philosophical, political, and funny. And a perfect read for science fiction fans when it fully launches on the 15th of October. 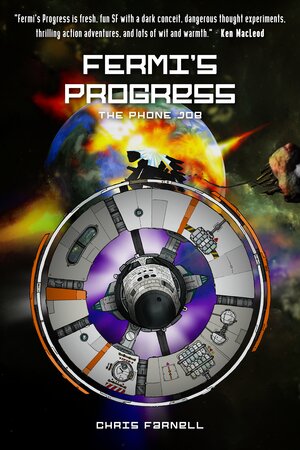 We've met our (definitely ragtag) crew. We've met the ship, the Fermi... oh boy! We've explored strange new worlds... Sought out new life, and new civilisations... We've boldly gone where no one has gone before.. and blown it all up!

"Simultaneously a tribute to the classic TV SF 'planet of the week' format and a very literal demolition job of the same - and so smart that it's never afraid to be silly."

When I started reading Dyson's Fear, I made assumptions about where it was going. But they were quickly smashed as the scope of the story dawned on me.

Starting Descartesmageddon, Chris teases us with one of the best misleading set-ups I've read. And yet again shows us how 'alien worldbuilding' is really done, while applying a beautiful sense of universality to life.

By Planet of the Apiaries, we may think we know what to expect. But again, Chris throws us straight into the middle of it, and expands the horizons once again. Even throwing the universality of life back in our face with the universality of greed, with a Hollywood-style R&D heist via Aliens.

Chris' love and knowledge of the genre is clear. You only have to read his articles on Den of Geek to see that. As is his analysis, exploration, and extrapolation of space opera into what it could be.

As Chris describes in his article, on How Science Fiction’s Ensemble Stories Humanize Space:

...the “space exploration” that is the cornerstone of much of the genre, is an idea deeply rooted in a colonialist, and often racist tradition.

...One of my concerns with the genre is how often the hero spaceship will turn up at a “primitive” planet, then overthrow a dictator, or teach the women about this human concept called “love”, or otherwise solve the local’s century’s old, deeply rooted societal problems in half-an-hour and change in a way that felt extremely “white colonialists going out and fixing the universe”.

"In Fermi’s Progress, the crew’s prototype spaceship has an experimental FTL drive that unfortunately vaporises every planet they visit as they fly away. It’s a device that riffs off the “overturn a planet’s government then never mention them again” trope of planet-of-the-week stories, keeps the ship and crew moving, and leaves the reader in no doubt as to whether or not these “explorers” are beneficial to the places they visit."

Us readers know this as we progress through the series, as does the Fermi's crew, along with some of the 'aliens' they meet on way. How the crew react to this, each in their own way, each humanly (or not), and each in a way we can recognise, is what makes the Fermi's Progress series special.

The Phone Job continues the journey we're all on together, and concludes it in the most space opera way possible. Not only with a bang, but with hope.

I'm proud of every single book we stock at Scarlet Ferret. And in adding this concluding book in a series to the shop, I know that I've learned more about science fiction, space opera, stories, humanity, and hope, in the most real sense, than I have in years, from a collection of novellas that read like Red Dwarf meets DS9, crashes into Blake's Seven, by way of every single Gerry Anderson series, and a whole lot of Space 1999.