Scarlet Ferret is proud to present our latest addition, The Voyages of Cinrak the Dapper by A.J. Fitzwater, and published by Queen of Swords Press. This is our first book by a small publisher, and we’re honoured to bring you such a well-received and much-loved title. 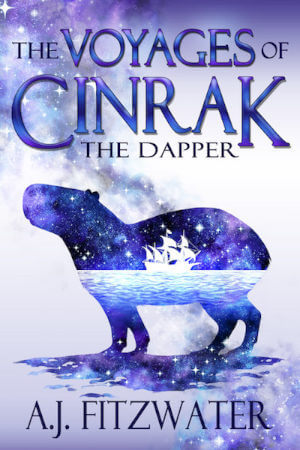 The Voyages of Cinrak the Dapper is a collection of connected fantasy tales detailing the exploits, loves and exquisite tailoring of the lesbian capybara captain, Cinrak the Dapper and her crew and friends. The seven tales of derring-do and adventure include:

Each tale is an absolute joy! And that’s what the author intended. In their introduction, A.J. Fitzwater explains:

This is something I have come to understand as the political landscape has shifted in New Zealand and around the world, especially since 2016.

This is not a new idea, as all marginalized populations have found ways to continue despite the spirit being under duress, the body under threat, their words suppressed, their future in jeopardy. We tell joyful stories in times of fear to light the way in the dark, to document that history, to model the voices that need to be heard and the bodies that need to be seen, and to simply say no, you will not take our joy from us.

The joy, love and ultimately, hope, springs from every page. Rather than buckling their swashes, the characters buckle their rather fancy belts, bow-ties and other dapper accoutrements, while exploring the oceans, making friends, and ensuring peace and a future for the IRATE pirate union...

If there was ever a time for needing something to smile about, now is it! And now is when we most need Cinrak, her salt, and her pure heart.

Set sail with your copy today! 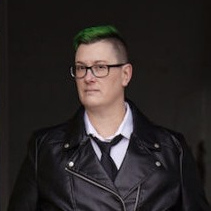 AJ Fitzwater lives between the cracks of Christchurch, New Zealand. Their work focuses on feminist and queer themes, and has appeared in venues of repute such as Clarkesworld, Beneath Ceaseless Skies, Shimmer, Giganotosaurus, GlitterShip, and in various anthologies. They are the author of rodent pirate escapades in The Voyages of Cinrak the Dapper, and the WW2 land girls shape-shifter novella No Man’s Land. With a background in radio, AJ lends their voice to podcast narrations, including for the Escape Artists universe. They enjoy maintaining a collection of bow ties.

The Voyages of Cinrak the Dapper

£2.99 Dapper. Lesbian. Capybara. Pirate. Cinrak the Dapper is a keeper of secrets, a righter of wrongs, the saltiest capybara on the sea and a rider of both falling stars and a great glass whale.