At Scarlet Ferret we like to think that our books can make a difference. Whether that’s to people’s lives, the way they think, the way they see the world, we’re not fussy how it works! Airedale is a fun, frenetic crime thriller, but as for many cyberpunk novels, it’s also a keen social commentary, an extrapolation of our current world in a few decades’ time. Highly specific to the UK and especially to West Yorkshire, it uses recognisable characters – the shifty grafter, the smooth, politically minded manager, the polished local politician, the brash factory owner – to pull together a strongly realistic story about what happens when you push too hard from below. 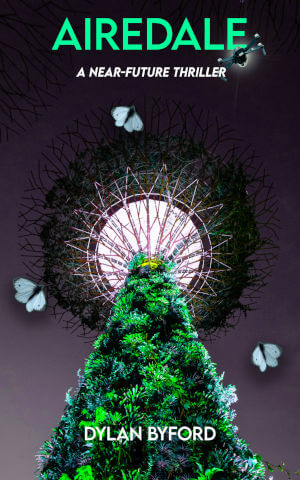 Police Analyst Haz Edmundson arrives at a crime scene in one of the abandoned warehouses of a megacity now covering West Yorkshire. Riots are rolling across the city and the police engage in street warfare against protestors.

Haz discovers the body of an activist who has crashed through the warehouse roof, cocooned in a wingsuit used in a daredevil sport, her head shattered by a mysterious mid-air impact.

The case is swept aside and labelled an 'accidental death.' However, Haz knows there's more to the case than the higher-ups are letting on. Someone (or something) is working hard to bury a murder, and the more Haz investigates, the more dangerous the trail becomes.

Set in a near-future Britain where technology has engulfed the landscape with sprawling megacities. The population is under heavy surveillance, memories are sold back to them for entertainment, and robotic drones intrude on both life and liberty.

Dystopia, eat your heart out

Look, we’re all living on the same planet, and whichever country you’re currently residing in, especially in Western societies, the pandemic has resulted in a ‘same boat’ kinda feel. Socially, things need to change. Corrupt politicians need to get out; poverty needs to be eradicated. Education, health and care services need to provide for the good of the people – not the monsters creaming the profits. New Right bull about league tables and privatisation and the cream rising to the top has to be put to bed (well, we can think of better places for it to go), and data privacy has to be properly regulated. We continue down the road we’re on, we’re headed directly for a version of Airedale, and it isn’t pretty. What’s more, Airedale is only set about 50 years into the future. This book is relevant AF and we’re happy to shout about it. Byford’s achieved this relevance without preaching – the real achievement – and the whole piece of work is, crucially, entertaining.

“I knew that Those-You-Shouldn’t-Even-Think-About had complete access to the data mountains. Nobody knew whether it was nonsense or just urban legend. Analysts liked to scare each other by whispering – out of electronic earshot – that they had adapted Modlee and had developed algorithms that could tell you what somebody was thinking. At least, thinking within a high degree of probability. They did so simply by knitting together their dynamic facial ratios, medical and family histories, comms, and your reading matter. Real black IG stuff. It was terrifying to think some frigging know-nothing servant could’ve had the whispers from them and given them the nod. All it took was sufficient access.”

Haz Edmundson might be a digital analyst with Justice, and he’s more dogged than brave, but he’s not what you might call respectable. His family was decimated by a tragedy a couple of years before the story takes place and they’re all still processing it as best they can. In the meantime, the hours are terrible, his personal organisation is even worse, and he’s fluttering from one memory experience to another, simultaneously worrying about his childcare arrangements and messing his life up with each disastrous decision. Whether he makes it through or he doesn’t, Haz is all of us, desperately trying to find a life worth living in a world where we have nearly no control over what happens to us.

“I dropped the car at an AJC depot south of Bingley. I’d decided to walk back to my flat. Although it was difficult working when the kids came home from school, I was worried that Ali wasn’t settling into his new class. This was one possible explanation for the nightmares. There was also the fact that he was of an age when he was more likely to get them. Of course, there was always the obvious, but I didn’t want to think about that. I just wanted to be at the house when they were there, really. The signals I was getting from Greg weren’t good and I wanted to keep half an eye on his work. I was close to considering whether to dump him for new childcare. Greg was turning out to be a piece-of-shit care op.”

Airedale has a lot of specials. Character development is [chef’s kiss] – as someone who spent a LOT of time in the Airedale region, I can tell you it is full of real people with all the smooth or desperate idiosyncrasies that seem to come with their roles. There’s a familiarity in the characters, almost a comforting reality to them. Byford has built his dark and looming megacity onto the existing mills and industrial features of the real place, with a deftness only someone from the area itself could achieve. Above all, there’s an urgency to the story as it flips you through Haz’s chaotic daily scheduling decisions, each one leading to another situation as it builds the mystery sky high. Told in pitch-perfect noir, you’re flung right in from the start and there’s no time to catch your breath until the very end. Sure, there are quieter moments, but just like Haz’s life, the call inevitably comes and you’re back into the fray.

“Every time I re-read sections of this book, or think about it a little further, I’m wowed again by how clever it is. Byford has thought of everything, and the detail is phenomenal.”

Buy your own Special Edition ebook of Airedale by Dylan Byford and we’ll also dead drop you a bunch of handy digital extras for additional background on this brilliant novel. 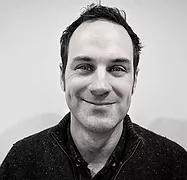 Dylan Byford was born in Yorkshire and raised in Northumberland. He has travelled all over the world but now lives in the foot of the Yorkshire Dales with his family.

A prolific playwright in his early writing career, Dylan has since turned to science fiction. Airedale is his first cyberpunk novel, a crime thriller set a near-future northern England, riven with corruption, social unrest and urban decay.